The belief that behavior can be affected by feeding hays or grain mixes with a high protein content is probably one of the most common misconceptions among horsemen. There is no scientific data that suggests that protein intake has anything to do with mental attitude. However, high-spirited behavior has been directly linked to the energy content of the diet. The horse is unique in that it compensates for excess dietary energy by increasing physical activity. As a result, the horse that receives too much energy (calories) in the diet is more apt to be excessively high spirited. High protein does not necessarily mean high energy, and vice versa. Grains have 30 to 50% more energy than hays, but not necessarily more protein. Beyond the grain source, too much energy can also come from the hay. Alfalfa, although high in protein, is also higher in energy than most grass hays like Timothy. If the amount of alfalfa fed supplies more calories than the horse needs, it is the energy content of the alfalfa, not the protein content, causing his hyper behavior. The bottom line: too much energy in the diet (excess calories) = too much energy in the horse (hyper behavior). Protein level has nothing to do with it.

Several surveys conducted on feeding practices have revealed that mature performance horses receive two to three times as much protein in their diet as they require. The common belief that training, intense work, or showing significantly increases the protein requirement in the horse's diet is false. This myth likely has its roots in human nutrition. For hundreds of years, it was believed that exercise and training involved the "tearing down of old muscle, and the building of new muscle." Since muscle is primarily composed of protein, it was deduced that more protein was needed in the diet of human athletes to serve as the building blocks for new muscle. A significant amount of both human and equine research over the last 50 years has disproved this theory. Protein requirements do increase slightly with training and exercise but this is insignificant in comparison to the protein needs of a young, growing horse, or a lactating broodmare. In most cases, we meet the increased protein needs of performance horses when we adjust the diet to provide for the increased energy needs.

Genetics, exercise and nutrition all play a role in the development of healthy bones, and as a result, the same factors are also linked to the occurrence of developmental orthopedic disease (DOD) in young horses. Most confusion regarding DOD is related to nutrition. Mineral imbalances have been well-documented as a cause of DOD. Excessive protein was blamed as a cause in the 1970s, but later studies disproved this connection. Feeding more protein than the foal needs does not increase growth rate above that achieved when the diet just meets protein requirements. Unfortunately, the diets of many young horses are kept quite low in protein for fear of causing developmental problems. Restricting protein will not result in improved bone growth, and can actually be harmful to the foal by decreasing feed intake, growth rate and skeletal development. On the other hand, overfeeding energy may result in developmental problems, particularly if protein and mineral intake are not increased at the same time.

Although alfalfa may provide more protein than mature horses need, there is no evidence to suggest that a moderate dietary excess of protein is detrimental to healthy horses. Protein is made up of amino acids, which are composed of carbon, hydrogen, oxygen and nitrogen. When horses (or humans) consume more protein than they need, the carbon, hydrogen and oxygen from the amino acids are used for energy and the excess nitrogen is excreted in the urine. Horses consuming alfalfa (and other high protein feeds) have been noted to drink more often and urinate more than horses consuming lower protein diets. But there is no reason to believe that a horse's kidneys will be damaged when this occurs. It's only when a horse already has pre-existing kidney disease that the high calcium and protein in alfalfa can aggravate kidney dysfunction.

Contact your Poulin Grain Feed Specialist to test your hay quality and build a personalized diet for your horse. 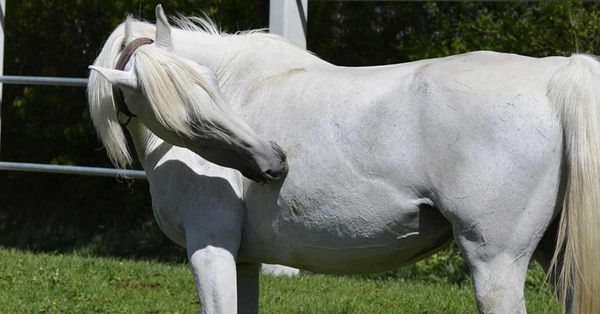 The incidence of colic in the general horse population has been estimated between 10 and 11% per year. In a recent study, colic was second only to old-age as the leading cause of death in horses.

Fall is here! The leaves are changing, and the temperatures are cooling off. It's hard to imagine that such a pretty time of the year could possibly be harmful to our horses.