Change is never easy, and the shift from conventional milking in a parlor to robotic milking is anything but simple. However, for Dan Barnes of Barnes Black and White Farm in Shoreham, Vermont, the addition of robotic milking to his dairy operation has come with big rewards.

Barnes Black and White Farm is owned by Dan Barnes, along with his father Bill and mother Meg, and his uncle Bruce. The Barnes family milks over 1,200 cows across three different locations in Addison County, Vermont. This spring, Barnes installed 4 Lely Astronaut A4 automated milking systems in a new facility that will house about 230 milking cows. This new facility was constructed to take the pressure off of the other milking facilities, and cows moved into the facility in April, 2017. 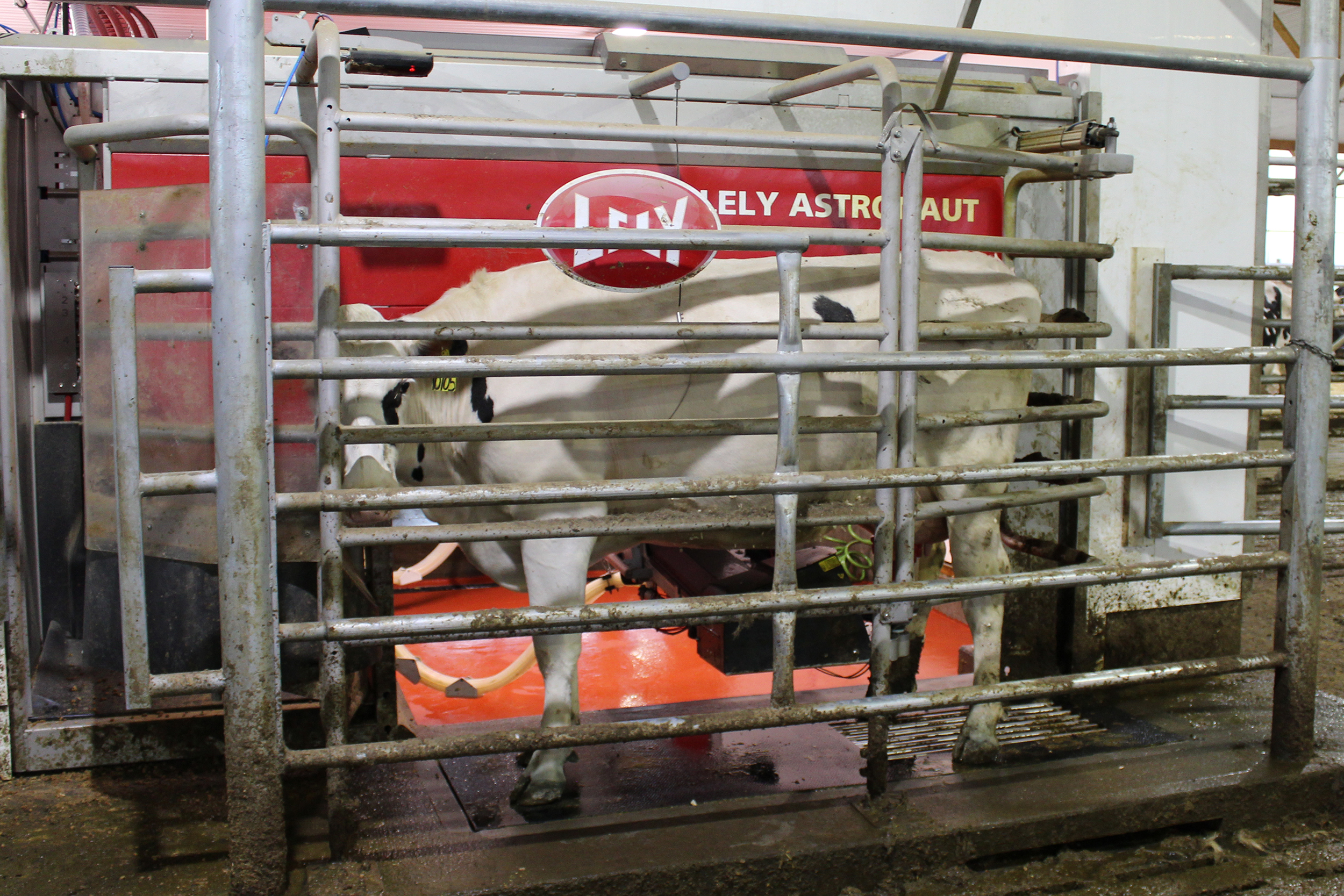 A cow is milked in the robotic milking station. Cows choose when to be milked voluntarily when their udders are full of milk.

The decision to incorporate robotic milking into the farm business was threefold. First and foremost, Dan Barnes felt, “that it was the right thing to do for the cows. There are so many benefits when you give the cows back their time and allow them to manage their own schedule.” Additionally, because the Barnes family milks cows at three different facilities, the autonomy of robots fit well into that system. And lastly, robots provided both a cost and stability advantage compared to a larger human labor force. According to Dan Barnes, “With robots, you are essentially locking in 20 years of labor.”

When the cows were first moved into the new robot facility, they were averaging about 80 pounds of milk. “They held right there for a week or so while we got them trained to the robots and the new facility,” said Barnes, “and then they just started climbing. They’re up to at least 90 pounds consistently now, and are often times closer to 93.”

Because they are still operating at their other milking facilities, Barnes chose to select just first and second lactation animals to move into the new facility. Younger animals tend to train to the robot more easily compared with older cows who have become accustomed to milking in a parlor. Also, it positions the farm to more easily transition more of the milking herd to robots in the future.

Cows were selected to move to the robot facility based on their udder confirmation and stage of lactation. At start up, most cows were moved into the new barn over the course of a day, and while the first few days were long, most of the cows trained easily. “Start-up went well, but since we were still milking in other facilities, we were a little shorthanded,” said Barnes, “Our biggest piece of advice for other farmers would be to have plenty of extra help around for that first week.”

In the robot facility, Barnes looks to Diane Norris, a Dairy Nutrition Consultant from Poulin Grain, for advice. Norris is impressed by how quickly the cows have adapted to the new facility. “They are already averaging 3.2 milkings per day, with 1.5% refusals and just a few cows on the fetch list,” said Norris, “and what’s great is we are already seeing an advantage – first calf heifers are peaking 6 pounds higher than similar animals milked conventionally, and 2nd lactation cows are peaking 13 pounds higher!”

Robotic milking also provides farm owners and nutritionists with so much more information compared with most conventional milking systems. “There is so much data that can be used to fine tune feeding and milking,” said Norris, “We can balance grain allowances for subgroups of cows within the herd, and monitor their performance so closely. It makes it fun, and we know that we are getting optimal milk production out of each cow.” 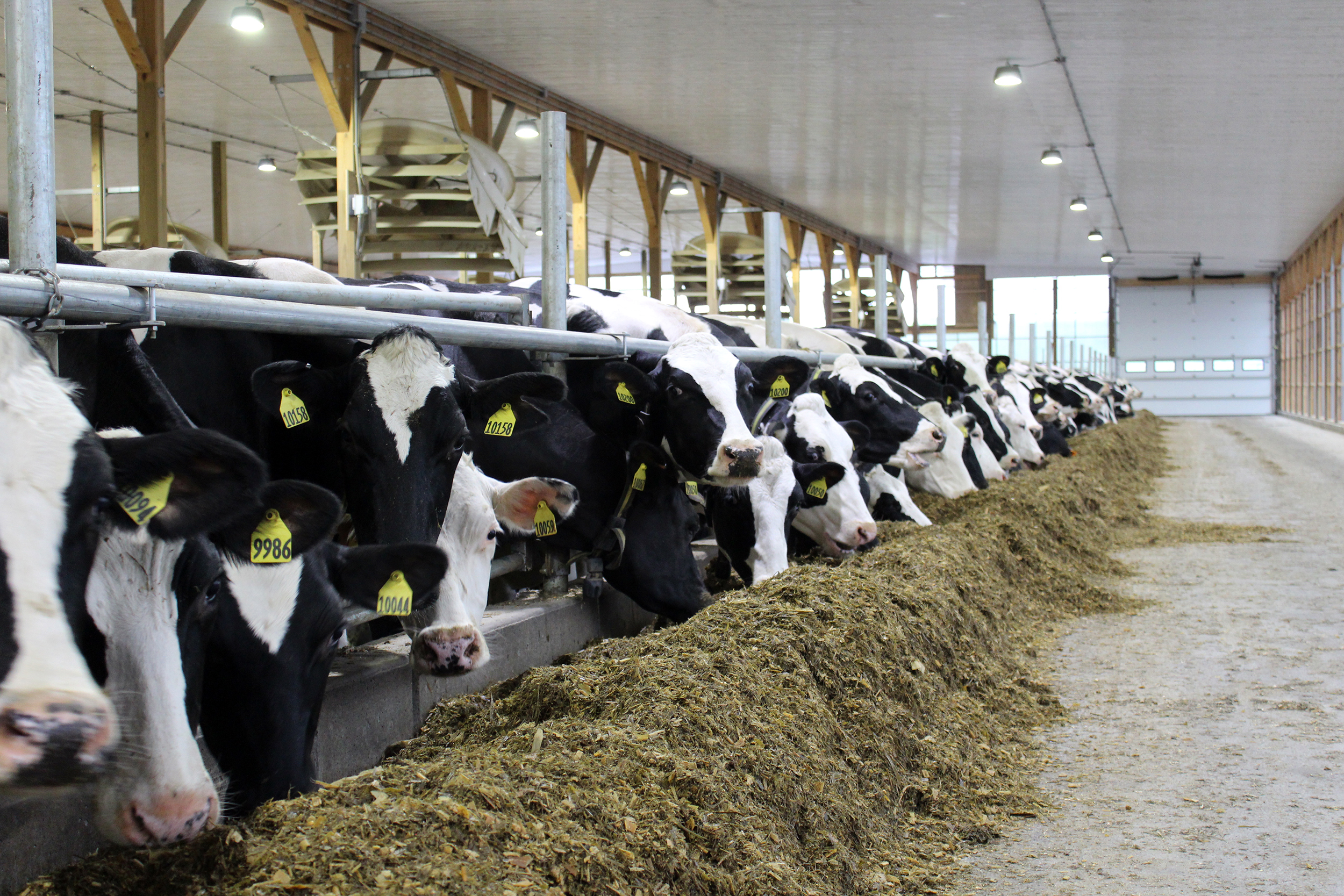 Cows at Barnes Black and White Farm have 24 hour a day access to feed, stalls to lie in, and the robotic milking station.

The new facility was designed by the team at Lely, based on other successful new barns designed both in the Northeast and the Mid-west. The barn contains two pens, with an exterior feed alley. There are two robots on one side of both pens. Because this new facility would require additional manure storage, Barnes opted for slatted floors with manure storage under the barn, and the barn is tunnel ventilated.

What’s the next step? Barnes plans to closely monitor cost and performance in the new facility compared to other facilities where cows are milking through a parlor. So far, the improved performance, milking cows in another facility without adding labor, and overall improvements in cow comfort are strongly in the robots favor. 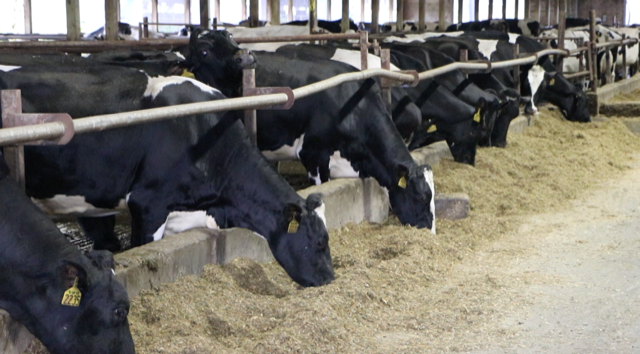 Gervais Family Farms has been producing high quality milk for decades, and they recently became a pioneer in a new program aimed to ensure that all of their farm’s

As margins grow tighter, simply following major management recommendations isn't always enough for a dairy farm to stay competitive. That’s why every detail is a big deal at Dimock