Vitamin E (tocopherol) is an important fat-soluble vitamin that plays several roles in the body. Its most important role is as an antioxidant that works closely with its partners Selenium and Vitamin C to protect the body from the oxidative stress of exercise, illness and certain medical conditions. Through this mechanism, vitamin E serves to maintain normal neuromuscular function. Vitamin E also helps keep the immune system strong. It aids the body in properly using vitamin K, helping maintain normal blood viscosity. Too much vitamin E (over 10,000 IU per day)can be dangerous and may increase the risk of, as well as interfere with, the uptake of Vitamin A. Main dietary sources of vitamin E are fresh green grass and supplemental forms. The required amounts of Vitamin E, as set by the 2007 Nutrient Requirements for Horses, for an 1100lb horse are in the table below.

Normal reference ranges for plasma/serum concentrations of α-tocopherol in the horse are:

Vitamin E naturally exists in eight different forms (alpha-, beta-, gamma-, and delta-tocopherols and tocotrienols) each of which has slightly different activity in the body. Even though there are 8 forms of vitamin E, the most biologically active form of the vitamin is called alpha-tocopherol. Alpha-tocopherol is considered the most active natural form because it is the preferred form of vitamin E transported and used by the liver.

Check out these downloadable flyers for quick facts on Vitamin E and Selenium:

Contact your Poulin Grain Feed Specialist to test your hay quality and build a personalized diet for your horse. 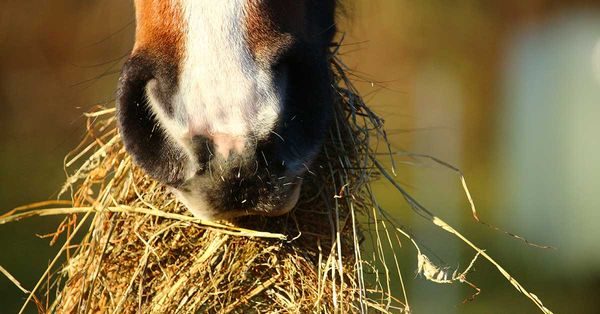 It is widely known that forage is the most important part of any horse's diet. Many of the nutrients in forages must be released from the plant material via digestion